Why Nepal's exports to SASEC have stagnated over the years

Except for India, trade with other countries is insignificant. Worse still, it is declining since 2008. Non-tariff measures, which include sanitary and phytosanitary (SPS) measures and technical barriers to trade (TBT), are one of the main reasons. For instance, some countries do not accept test reports from Nepal because many laboratories are not internationally accredited.

India has always been the darling trade partner of Nepal. It exports overwhelmingly to India. Exclude India and Nepal's exports to other countries, especially SASEC countries (which include Bangladesh, Bhutan, India, Maldives and Sri Lanka), are unimpressive and in steep decline over the last decade. 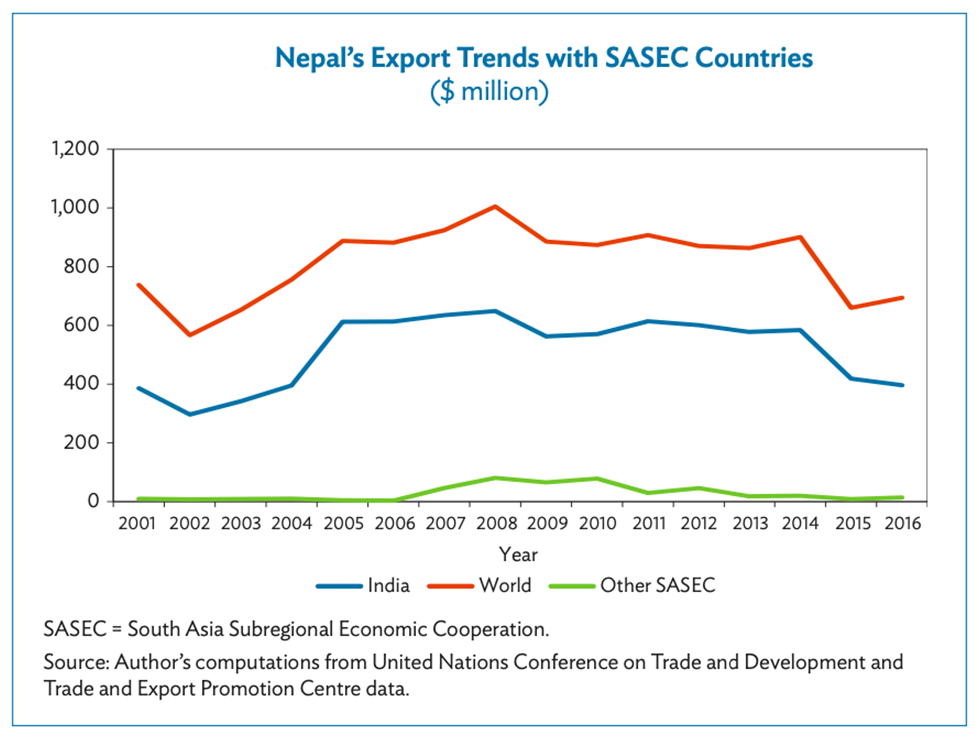 Exports to Bangladesh fell from a peak of $76.7 million in 2008 to $12.9 million in 2016, for example. Trade with them (except for India) comprises less than 1%. Globally, though, Nepal exports plenty of products in huge volumes.

So what explains this unfortunate scenario?

Among others, non-tariff measures, which include sanitary and phytosanitary (SPS) measures and technical barriers to trade (TBT), are one of the main reasons. In its simplest form, SPS measures are those applied to protect humans from plant- or animal-carried diseases and risks arising from contaminants or toxins. And trade barriers (or TBT) are government-imposed restraints on the flow of international goods.

Issues related to quality control infrastructure have been the major impediment for Nepali exporters. They are hindering the exports of tea, cardamom, coffee, textiles and many more.

But if trade with SASEC countries is almost non-existent solely because of inadequate safety standards of the country, then one needs to ask how come Nepal is able to meet those same standards globally?

Some say it is because some rules followed by SASEC countries aim to protect their domestic industries. Other arguments include that their sanitary and phytosanitary measures are inefficient, delaying the movement of goods and increasing trade costs.

The underlying reasons are far from that, however. One main reason is that because there is no global standard for food safety, exporters often have to comply with different ones in America and Asia.

Of the total exports to both the world and India, textiles and clothing comprise the most. Whereas to other SASEC countries, the figures are quite low despite Nepal having an export potential worth over $400,000. And in almost all product categories, India is an overwhelmingly dominant export destination.

The introduction of the Food Act in 1967 paved the way for regulating food quality and protecting consumers from adulterated, contaminated and substandard food. Moreover, Nepal's accession to the World Trade Organisation in 2003 meant it had to introduce new legislation and amend the existing ones that met international practices regarding food safety and consumer protection.

However, some regulatory gaps between food safety standards adopted by Nepal and those of the other SASEC countries remain. Some chemicals and other contaminants that SASEC members consider lethal are not included in Nepal's food standards. Bangladesh caps the maximum amount of radioactive contamination in food products to a certain level. But Nepal has not yet restricted the levels of radioactive substances in its food products.

Strict testing prevents Nepali exporters from exporting agricultural and food products. Some countries do not accept test reports from Nepal because many laboratories are not internationally accredited. For packaged foods, Sri Lanka has stringent labelling requirements, beyond the ones followed by Nepal's Food Act.

Another problem stems from a lack of information about the potential markets. Though certain products with no safety standards have high demand in some SASEC countries, many exporters think those products are not in demand. For example, rosin, resin acid and derivatives are spared TBT requirements in Bangladesh and Sri Lanka. Yet some exporters do not know about this, limiting the product export only to India.

Implementing reforms in the areas of SPS and TBT can help enormously. First: the government should proactively engage with regional organisations and bilateral trade partners to mitigate trade obstacles for seamless exports from Nepal. Second: establishing an internationally recognised national accreditation body to certify agricultural exports that meet the safety standards of export markets.

The last and most important one is: bridging the gaps in regulations between Nepal and other SASEC countries. It can be achieved through harmonising rules, at least for the products with export potential in the region.

Even though harmonisation might solve some difficulties, many will remain on the back of procedural obstacles such as excessive testing. By some estimates, exporters face about 13% of all problems due to strict regulations and 73% due to procedural obstacles, a significant portion of which happen in Nepal.

Still, Nepal has a lot of work to do. Its inability to effectively fulfil the food safety requirements of regional partners has significantly impacted the country's exports—and economic growth.