Election Manifestos: No style, no substance, no basis

Have you ever read an election manifesto? Have you ever compared and contrasted and made an informed choice on their basis? Are the documents easily digestible? Do they promise the moon, but have little basis to deliver?

An election manifesto is supposed to be a central policy document that political parties release during an election and promise to commit to and pursue once they win the election. They entail overarching socio-political and economic goals and a set of plans of actions to achieve the stated goals.

As Nepal general elections 2022 closes in, political parties have released their respective manifesto with gusto and without any reservations. As witnessed in the past elections, parties have advanced a rosy list of development propositions and some lofty socio-political and geopolitical commitments, but how credible are they?

Why is the manifesto important?

As the name suggests, election manifestos are publications that declare in detail what a particular party intends to achieve in its role after the election and how and why they deserve votes.

It states the party view with regard to local, national and international affairs and their planned programs and plans when they come to power. Such documents retain relevance in assessing the political priorities and ideological preferences of competing political forces.

The election manifestos also serve as a reference document for the people, providing a clear outline of the promises and propositions made by an electoral party during the campaign process. The election manifestos give the citizens an idea of the party's post-election commitments and strategies to run the government.

Such documents also help expose discrepancies between the commitments made during the previous election and their fulfilment in the election year under consideration. Undoubtedly, failure or fulfilment of obligations is an important measure for evaluating manifests and parties. Some missing nuances in the recent manifestoes

Tall infrastructure and ‘populist’ commitments but without plan and financing source

Parties have proposed some big plans and large-scale infrastructure projects including roads and railways, airports, industrial development, energy and transmission, and so on. Similarly, they have promised many redistributive programs such as free medical treatment and insurance schemes, cash support for last religious rites, menstrual allowances for women, and increment in elderly allowances. 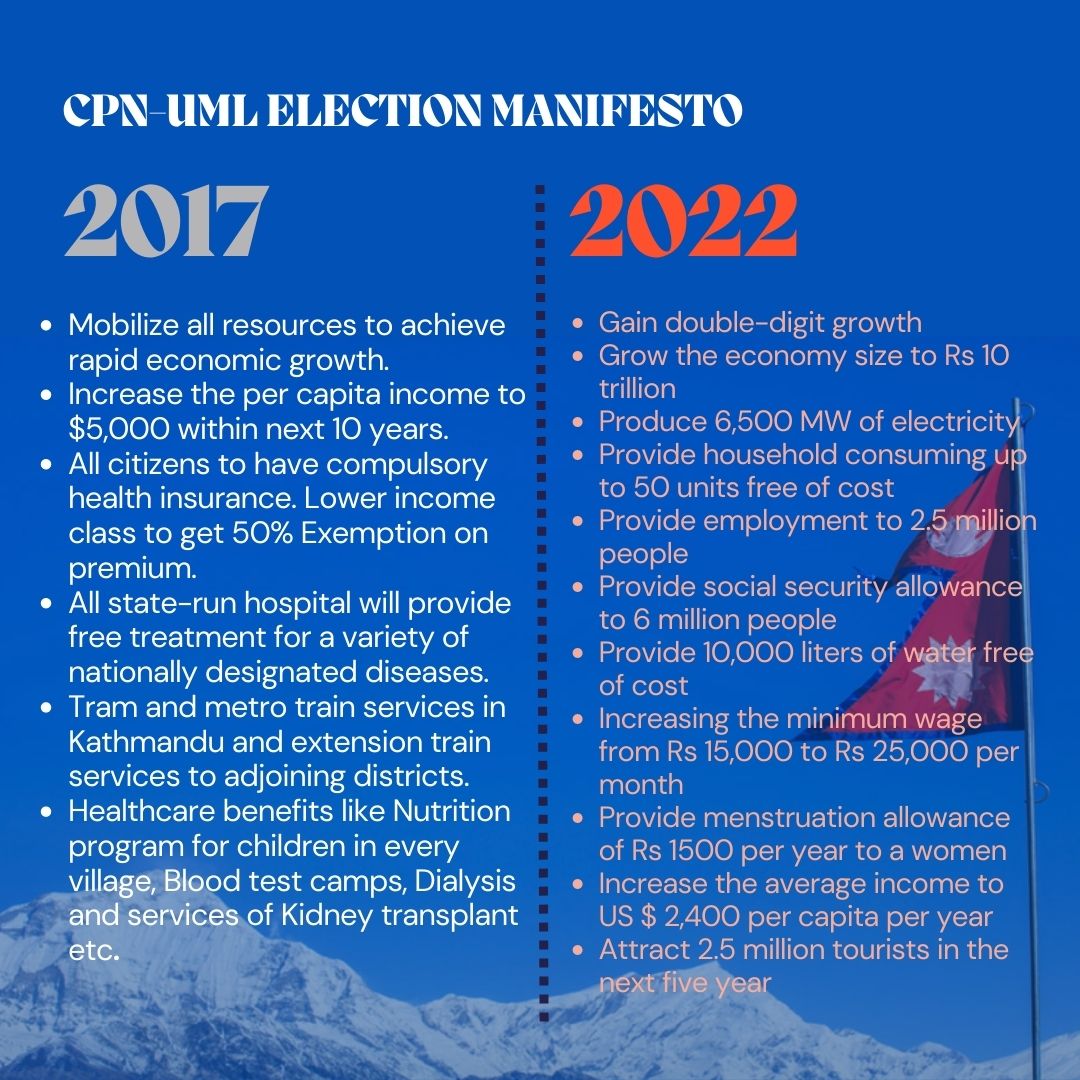 However, they fail to elaborate on how these projects, programs and schemes will be financed or their source of capital and the policy reforms they will introduce — reforms to unlock private and foreign investments and larger tax base, reform bureaucracy and reduce government expenditure burden, restructure taxation and their plans on public and international debts.

Considering Nepal's current dire economic situation and inability to fully spend capital budget, completion of many of these proposed projects within the five-year time frame appears unrealistic with no budgetary source, a lack of technology for a large-scale project, and adequate research required for these projects.

Nepal ranks 117 in the corruption index 2021 out of 180 countries and territories, making it one of the world's most corrupt countries. Vertical and horizontal corruption has been plaguing the nation for decades yet corruption scandals emerge and disappear without holding any political leadership accountable.

In the last five years, scandals like corruption in the purchase of widebody aircrafts, Lalita Niwas land grab scam, Omni scandal during the Corona crisis, leaked audio of Gokul Banskota (then minister for communication and information technology) while negotiating construction of printing press in the country, allegations of corruption in Budhi Gandaki hydro project, current finance minister Janardan Sharma’s alleged budget scandal caught in CCTV and corruption allegation against ‘Educate Girl, Save Girl’ campaign in Madhesh Province, all made big noise. All these scandals involved big political names but the buck didn’t end there, and most were swept under the carpet. Party leaders tossed allegations at each other, including at parliament, demanding thorough investigation.

Yet this election, none of the major political parties have expressed any commitment to investigate any of these scandals thoroughly or proposed concrete plans to address the systemic corruption.

MSMEs are one of the driving forces of Nepal’s economy contributing over 20% of GDP and 2.7 million jobs but face an estimated financing gap of $3.6 billion and a mountain of legal and bureaucratic challenges.

While the manifestoes boast about creating millions of jobs and attaining strong economic growth, they have failed to outline specific reforms that display their drive for promotion of businesses.

Many issues relating to taxes, intellectual property rights, bureaucratic hurdles like opening and closing businesses and expanding business scope under one entity, collateral free access to finance, state support for businesses and research and development, skilled workforce and amicable environment for FDI are still pain points for businesses, who additionally face challenges in exports, supply chain and market linkages. By failing to address these issues by advancing specific policy reforms, manifestoes also fail to connect with a growing young population who are excited about the idea of businesses vis-à-vis innovation and tech, startups, and entrepreneurship.

A dispute with India over territory, discussions over China’s growing influence in Nepal, it’s debt-driven infrastructure program BRI and frequent closure of Nepal-China border points, and a heated polarisation in Nepali society over the US grant program MCC marked the geopolitically sensitive Nepal’s foreign relations in the last five years.

While all the parties have expressed commitment to resolve territorial disputes with India through diplomatic channels, parties like CPN (MC) and Communist Party of Nepal-Unified Socialist (CPN-US) have reiterated border regulation with India and review of the 1950 Treaty of Peace and Friendship. With China, none have expressed clearly as to how they will approach China's BRI program.

On the other hand, the direction of regional and international relations is shifting drastically — with changing relations between US-China, India-China and India and China’s seesaw influence in South Asia.

Another concern is how the parties will undertake economic diplomacy with their bilateral and multilateral partners, and more importantly the issues of climate change — climate finance and loss and mitigation.

None of the parties have definite answers to this complex landscape. Some of these answers would lie in how Nepal manages its foreign ministry, think-tanks, career diplomats, technology, universities, multilateral platforms and many other resources over geopolitics, climate change, trade and investment and resource sharing.

However, the only broader agreement between parties is for balanced, non-aligned and sovereign foreign-policy free of military alliances and one that would prevent the use of Nepal’s territory against its neighbours stating a nuanced and a long-term plan of action.

Taking the voters for granted!

Many see election manifestos as a ritualised exercise - a list of sweet but empty promises. But there are other examples of how political parties take citizens for granted.

The manifestos are released close to the election date depriving the voters with ample time to analyse, compare, contrast and make an informed voting decision, a trend that political parties have carried over since the last general election in 2017.

The documents are also bulky in text and lack style, presentation and imagination for this digital world, and even incorporate self-plagiarism from the past documents.

Rima Sah is a researcher/writer at the_farsight. She is a graduate in Sociology from South Asian University.