A glance into the costs for conducting polls in Nepal

As general election closes in, we take a quick glance into costs of conducting polls in Nepal and election campaign finance:

As the general elections (Province + Federal) closes in, the_farsight takes a quick glance into the costs of conducting polls in Nepal in the past 15 years and campaign finance and some of their implications:

The government expenditure required for conducting polls in Nepal has usually hit the roof when compared to its economic size.

During the 2008 CA election, it is estimated the election commission alone spent NRs 7.6 billion. This election, the commission has sought a budget of NRs 10 billion, while already spent NRs 5.34 for the local election. The total is double the budget of 2008. 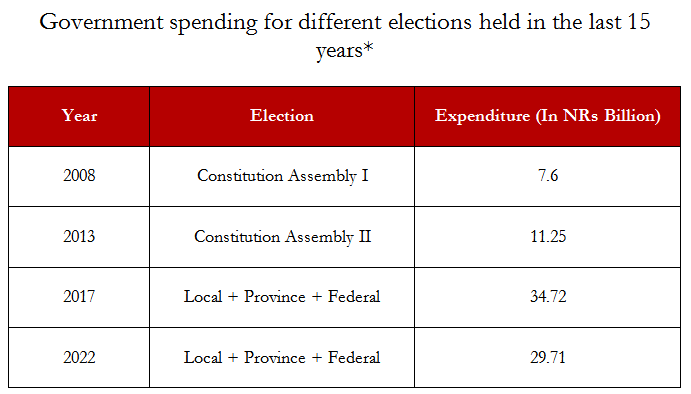 Although the 2017 and 2022 elections include three tier elections, and the commission's expenditure may be justified, the elections entail other costs too, mostly spent on ensuring election security. This brings the estimated costs to over NRs 29.71 billion which may rise further as the election concludes.

During the 2017 election, the total government spending is estimated at NRs 34.72 billion.

The extent of money that flows into conducting elections and campaign finance, for cash-strapped econonomy like Nepal, is alarming.

Although there are few ways to reduce the costs like adoption of Electronic Voting Machines (EVM) and digitisation of the election process, political parties are still not convinced about the tech and there are a large number of political parties to accommodate in the EVM.

With the government expenditure to conduct polls combined, the total election bill amounted to NRs 131.62 billion.

Even top political leaders like Prachanda and Shashank Koirala have openly acknowledged that candidates have to spend massively for election campaigning to increase their winning chances.

Such expensive election campaigns without transparency diminishes election integrity as candidates will have to recoup their election spending. Excess flow of money into politics also increases the likelihood of corruption and nefarious influence of elites and businesses, eventually threatening democracy and governance.

It is difficult to ascertain the actual economic costs of elections other than estimating polls and campaign expenditure figures, which are also daunting.

Elections spur short-term demand as money pumps into the market during polls and campaigns. But election fever across media, villages and metropolitan cities, closure of schools and businesses during election times and prolonged vote counting have different economic implications as work and productivity stall.

With victory of incompetent candidates and increased possibility of corruption, expensive elections are more likely to result into bad economic outcomes.

For Nepal, the massive amount of finances that goes into elections (conducting polls + campaign finance) have huge opportunity costs. Public finance on elections can be used for much needed public investments. Similarly, election campaign finance can go into social welfare and private investments like businesses.

Lost investment due to invalid votes

According to the Election Observation Committee study, election spending per voter was NRs 4,923 during the 2017 local election (polls + campaign combined).

As 17% of the votes casted turned invalid, the wastage spending stood at NRs 11.42 billion.

Such wastage, which is one of the highest in the world, further raises the question about the effectiveness and credibility of overall spending on elections.

Shraddha Aryal is a researcher/writer at the_farsight.